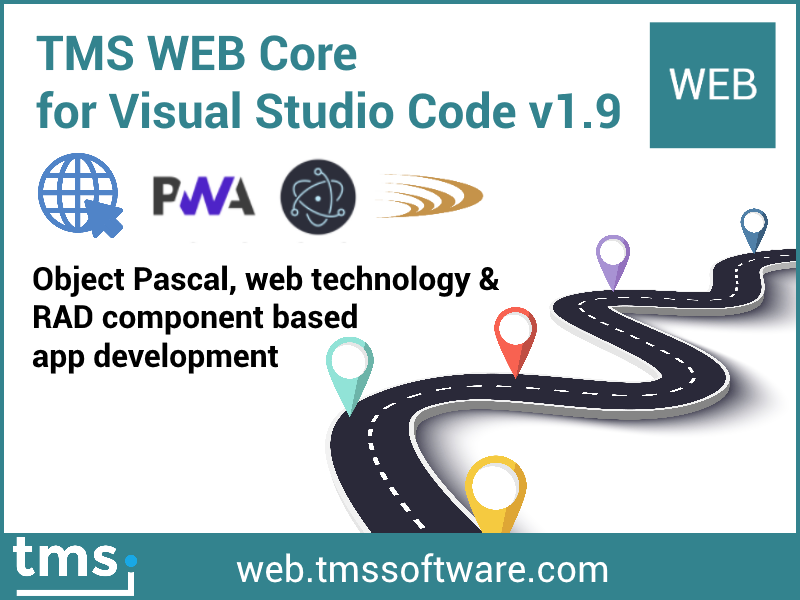 Originally, a quite complex add-in was written for the Delphi IDE to host development of web client applications based on the TMS WEB Core framework and using the pas2js compiler technology. The second step was to provide a similar IDE integration for the Lazarus IDE.
Now a plugin was created for the Visual Studio Code IDE that offers everything expected from a modern IDE: form designer, tool palette, object inspector, structure pane, code-editor with code completion, ... So, directly from Visual Studio Code you can create web client application projects based on the TMS WEB Core framework and debug, compile and run these from the IDE. No additional tools are needed to create fully working web client applications.

Why we did it? 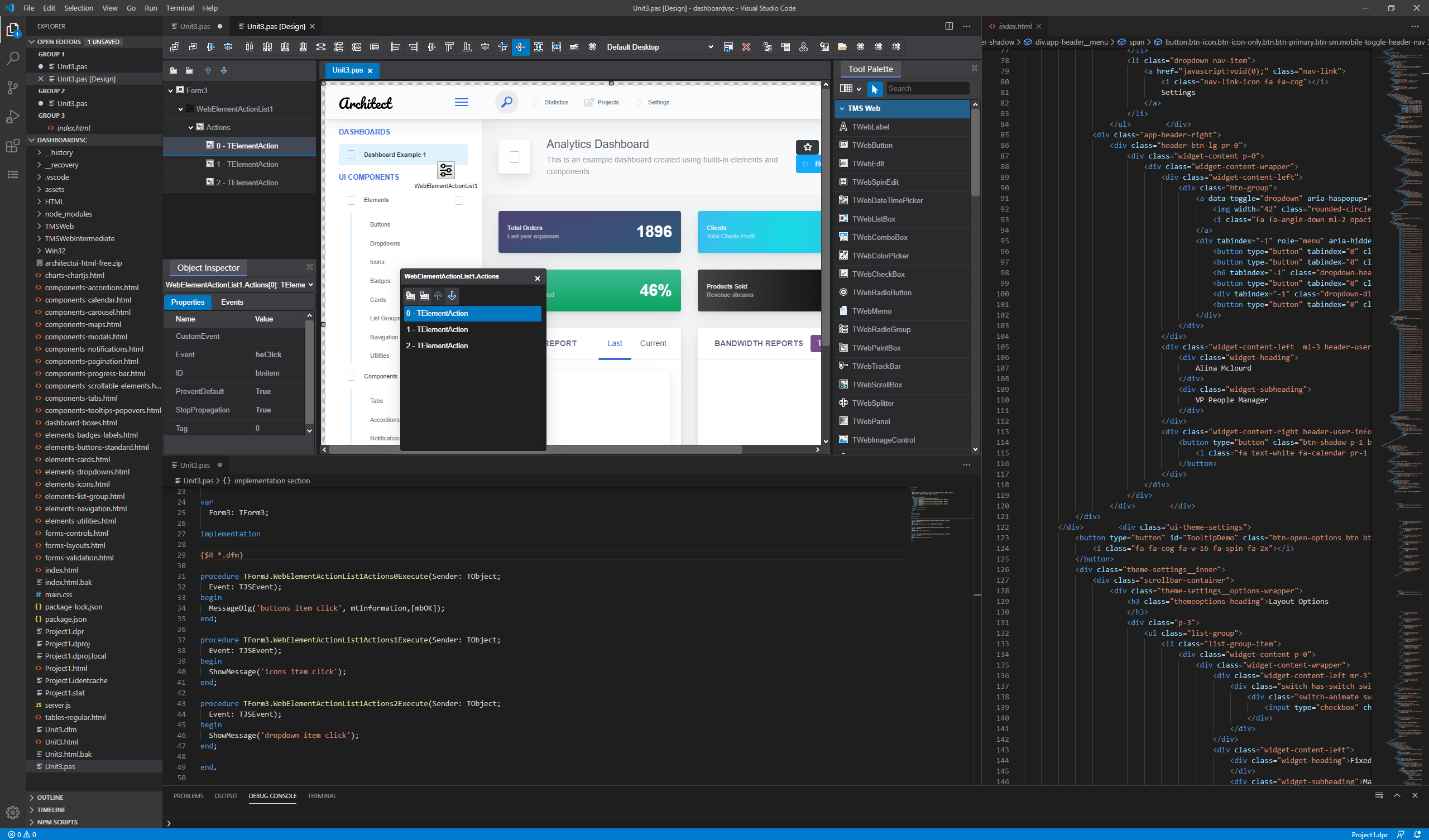 José Leon Serna, former Embarcadero chief IDE architect, had the idea and the expertise to host a full IDE experience within Visual Studio Code. It was like the most natural fit to form a team with TMS software having produced the TMS WEB Core framework and bring the IDE experience and framework together in Visual Studio Code. Almost 2 years of intense and often hard and complex development went into this project. One of the big challenges and major differences with how TMS WEB Core works in the Delphi IDE, is that in Visual Studio Code, the component framework is fully live while in the Delphi IDE, it is simulated using VCL. This challenged the framework quite a bit but the advantage is that all the hard work pays off for the robustness of the framework components overall.

For who did we do it?

What do we plan?

We hope to get your feedback during this public beta phase to get your feedback and comments that should allow us not only to make the first release as robust as possible but also to hear your thoughts to steer future development steps. We aim for a v1.0 release in Q3. After v1.0, focus will be on bringing features like PWA support, Electron support, 3rd party component install support and stay current with planned new exciting developments of the pas2js compiler.

What do I choose?

In a nutshell, these are very exciting times for Object Pascal developers. The importance is to have fun and being productive while developing, to focus on your business logic instead of the technology complexities. Go ahead and try our new public beta of TMS WEB Core for Visual Studio Code. We're eager to learn about your experiences and interested to hear where there might still be a couple of rough edges we need to polish.

One thing is sure, your #staycation won't be boring!

Unsure how to get started? Don't worry, our colleague Gjalt guides you:

6. Friday, August 7, 2020 at 2:58:37 PM That is not (yet) available. For most part, this is also not longer needed as controls register needed libraries now and these get automatically inserted when such control is dropped on the form. If you still want to add other library references, you can open the project .HTML file directly in Visual Studio Code and edit the script links there.

7. Friday, August 7, 2020 at 4:00:27 PM Stunning achievement. I can actually undo in the designer! Works great on the Mac. When do you think we can use the FNC components with VS Code/TMS Web?

8. Friday, August 7, 2020 at 4:02:10 PM Working on integrating the entire FNC product line into TMS WEB Core for Visual Studio Code is actually what we are working on here as we speak. So, expect it later this year.

10. Monday, August 10, 2020 at 6:19:16 AM Downloaded the extension through market place from VS Code but failed to activate the trial license. Always reports an error "The registration has failed!".

11. Monday, August 10, 2020 at 10:24:51 AM Are you sure that no firewall, proxy or other security is blocking the https requests or response to activate the license?
You might be able to check this with a program that monitors the network packets.
In case you see that the requests are sent and received and you are still not possible to activate the license, please send us a mail with the request and response attached so we can further investigate.

13. Tuesday, May 25, 2021 at 8:20:31 PM i have receive my trial license TMS webcore VSC, but when i generate license in command pallete raise error that said : Cannot create file "C:\User\USER\Documents\TMSWebLicenseGeneratorLog.txt". Access is Denied

what should i do then?

14. Tuesday, May 25, 2021 at 8:59:35 PM Please use
https://www.tmssoftware.com/site/support.asp
for technical support.
When contacting, provide information about the Windows user account and its permissions when running the license generator.